This document proposes a design of symmetric key algorithm based Initial Attestation in TF-M.

As pointed out by PSA Attestation API 1, the use cases of Initial Attestation based on symmetric key algorithms can be limited due to the associated infrastructure costs for key management and operational complexities. It may also restrict the ability to interoperate with scenarios that involve third parties.

The top-level design is shown in Overall design diagram below. 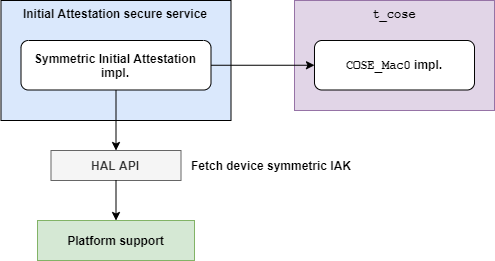 The COSE_Mac0 implementation in this proposal is a prototype only for Proof of Concept so far. It may be replaced after t_cose officially supports COSE_Mac0 message.

Decoding and verification of symmetric Initial Attestation is also included in this proposal for regression test. The test suites and IAT decoding are discussed in TF-M Test suite. 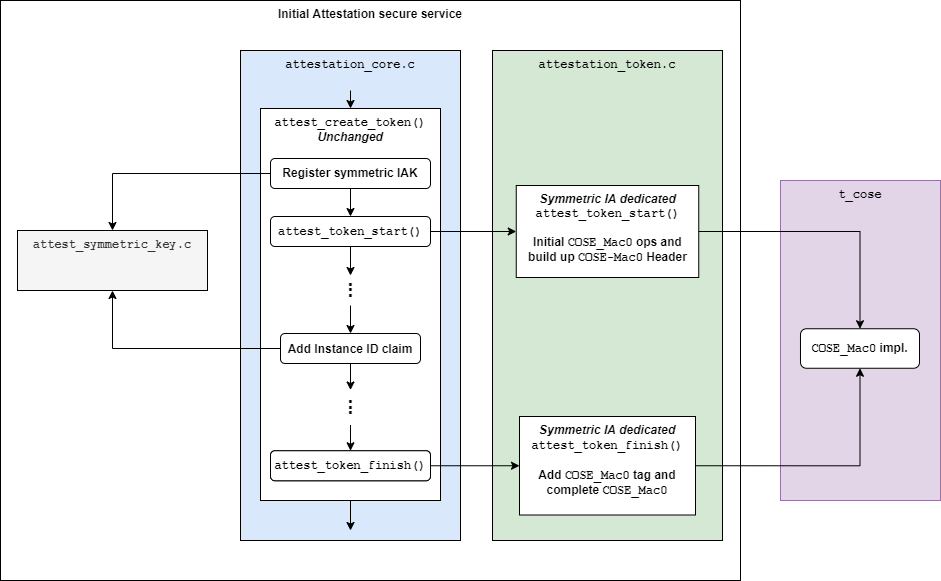 The details are covered in following sections.

Symmetric Initial Attestation dedicated attest_symmetric_key.c implements the attest_get_instance_id() function. This function returns the Instance ID value, calculating it if it has not already been calculated. Refer to Instance ID claim_ for more details.

Only symmetric IAK for HMAC algorithm is allowed so far.

In symmetric Initial Attestation, Instance ID is also calculated the first time it is requested. It can protect critical symmetric IAK from being frequently fetched, which increases the risk of asset disclosure.

The Instance ID value is the output of hashing symmetric IAK raw data twice, as requested in PSA Attestation API 1. HMAC-SHA256 may be hard-coded as the hash algorithm of Instance ID calculation.

According to RFC2104 4, if a HMAC key is longer than the HMAC block size, the key will be first hashed. The hash output is used as the key in HMAC computation.

As a result, symmetric IAK raw data should be hashed twice to generate the Instance ID value.

The Instance ID calculation result is stored in a static buffer. Token generation process can call attest_get_instance_id() to fetch the data from that static buffer. 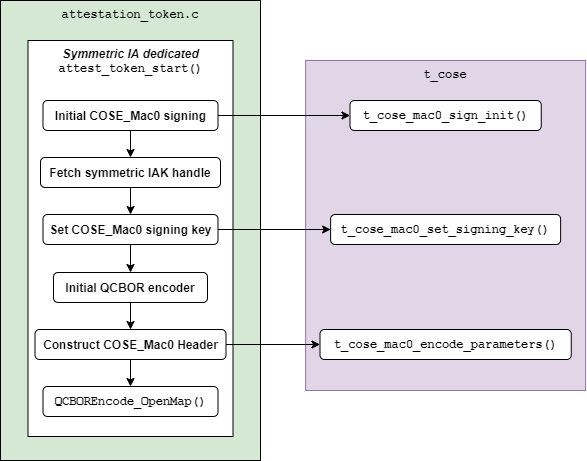 Descriptions of each step are listed below:

The Instance ID value is fetched via attest_get_instance_id(). The value has already been calculated during symmetric IAK registration. See Instance ID calculation for details.

The other steps are the same as those in asymmetric Initial Attestation implementation. The UEID type byte is set to 0x01.

The whole COSE and CBOR encoding are completed in attest_token_finish().

COSE_Mac0 supports in t_cose in TF-M include the following major functionalities:

According to RFC8152 5, COSE_Mac0 and COSE_Sign1 have similar structures. Therefore, the prototype follows COSE_Sign1 implementation to build up COSE_Mac0 file structure and implement COSE_Mac0 encoding and decoding.

Only HMAC is supported in current COSE_Mac0 prototype.

New files are added to implement the functionalities listed above. The structure of files is shown in the table below.

Other t_cose files may also be changed to add COSE_Mac0 associated data types and function declarations.

HMAC operations are added in crypto_adapters/t_cose_psa_crypto.c. Preprocessor flags are added to select corresponding crypto for COSE message signing and verification.

The COSE_Mac0 signing context is defined as

t_cose_mac0_set_signing_key() sets the key used in COSE_Mac0 signing. Optional kid, as a key identifer, will be encoded into COSE_Mac0 Header unprotected bucket.

t_cose_mac0_encode_tag() calculates the authentication tag and finishes the COSE_Mac0 message.

The COSE_Mac0 verification context is defined as

t_cose_mac0_verify() decodes the COSE_Mac0 structure and verifies the authentication tag.

If T_COSE_OPT_SHORT_CIRCUIT_TAG option is enabled, COSE_Mac0 encoding will hash the COSE_Mac0 content and add the hash output as an authentication tag. It is useful when critical symmetric IAK is unavailable or cannot be accessed, perhaps because it has not been provisioned or configured for the particular device. It is only for test and must not be used in actual use case. The kid parameter will either be skipped in COSE_Mac0 Header.

If T_COSE_OPT_ALLOW_SHORT_CIRCUIT option is enabled, COSE_Mac0 decoding will only verify the hash output, without requiring symmetric key for authentication tag verification.

The workflow of symmetric Initial Attestation dedicated attest_token_decode_validate_token() is shown below. 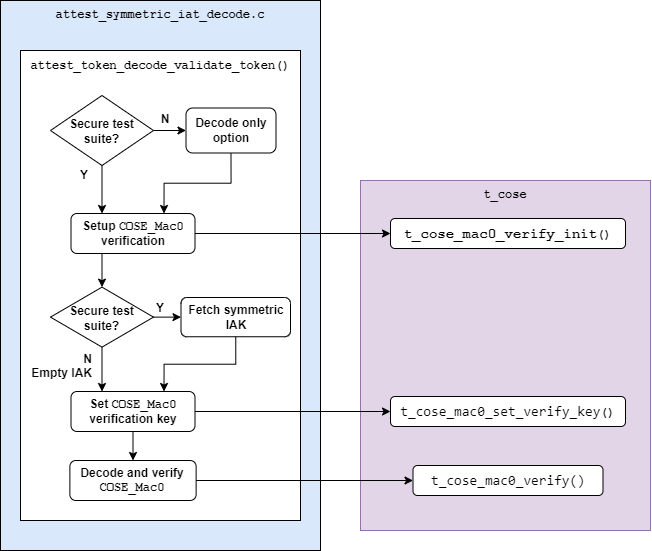 If the decoding is required from secure test suite, attest_token_decode_validate_token() will fetch symmetric IAK to verify the authentication tag in COSE_Mac0 structure. If the decoding is required from non-secure test suite, attest_token_decode_validate_token() will decode COSE_Mac0 only by setting T_COSE_OPT_DECODE_ONLY option flag. Non-secure must not access the symmetric IAK.

HAL APIs are summarized below.

attest_plat_get_symmetric_iak_id() gets the key identifier of the symmetric IAK as the kid parameter in COSE Header.